Particle Size Distribution of Propofol Injection from Ampules and Vials: The Benefits of Filitration

Abstract:  The Centers for Disease Control has identified intravenous propofol, a lipid-based medication, as a cause of postoperative infections in hospitalized patients. It appears the increased risk results from poor aseptic technique in the preparation, storage and administration of extemporaneously prepared propofol infusions. An additional risk of preparing propofol injection includes glass particulate contamination when the ampule dosage form is used. The current study, therefore, examines the extrinsic particulate load between propofol syringes prepared from ampules and vials with and without the use of a filter needle.

Ten operating room clinicians were asked to prepare propofol infusion from ampules using a standard needle and a special filter needle. A similar comparison was performed separately in the laboratory using propofol vials to deduce differences between the normal presence of fat globules and the adventitious introduction of glass particulates from propofol ampules. Particle size analysis was determined by a single-particle, opticalsensing device using laser light extinction. Aliquots of the unfiltered and filtered samples were analyzed in triplicate by number-weighting all particles = 1.75 µm (instrument threshold for detecting abnormal particles) and all particles > 5 µm and > 10 µm (theoretical physiologic threshold for producing embolic syndrome). Significant differences were noted between dosage forms with respect to the number of particulates present from the pre- to the postfiltrate samples. A reduction in very large particulates (> 10 µm) was observed from the ampules (p=0.034). No differences were noted for the smaller particles (> 1.75 µm, p=0.333; > 5 µm, p=0.229). Of the propofol vial samples, no differences were noted for the larger particles (> 5 µm, p=0.575; > 10 µm, p=0.229). However, a significant increase in particle size was noted for the smallest particles (> 1.75 µm, p=0.0001). This increase in the number of particles in the postfiltrate may reflect the effects of filtration in destabilizing lipid particles. The use of the 5-µm filter needle significantly reduced the amount of abnormally large particles (> 10 µm) from the ampule dosage form, whereas no difference was observed from the propofol vials. This implies the abnormal particles present were other than lipid and likely to be glass associated with ampule breakage, suggesting the 5-µm filter needle be a standard part of propofol therapy when preparing infusions from ampule dosage forms. 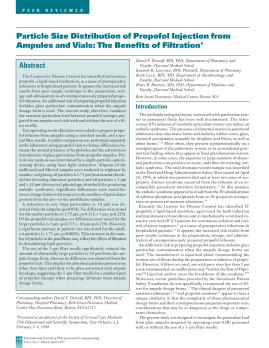 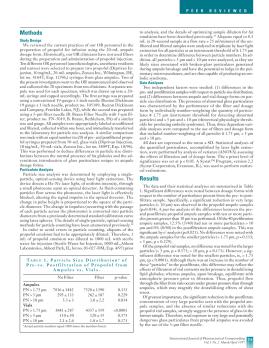 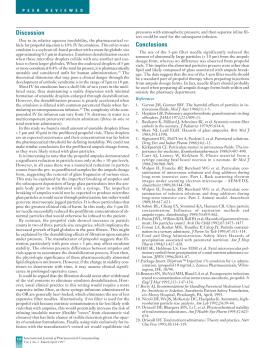