Abstract:  The author mentions that negative statements have been made about pharmaceutical compounding, especially regarding the compounding of sterile product admixtures. He advises compounding pharmacists to focus on putting patients first in terms of compounding correctly (inexperienced compounders should not work with these preparations), practicing, testing and focusing on safety. He recommends three steps for getting started in compounding in this field. First, practice reconstituting medications in your certified cleanroom and laminar airflow hood and have the preparations tested for potency, sterility and pyrogens; if results are good, move on to the next step. Second, practice preparing several multiple-dose transfers and have them tested. If the preparations pass, continue on step 2 for 6 months before moving on to the next step. Third, perform your compounding with someone who is already experienced in sterile product admixture compounding. Prepare sterile-water intravenous preparations on the counter in your pharmacy; then sterilize the preparation in your laminar airflow hood and have the preparation tested. Then move on to more complex injections, and always test them. The author hopes that this article will encourage compounding pharmacists to reconsider their standards and practices and advises readers to stick to what they know and refer other compounding for which they are not qualified to a more qualified pharmacist. 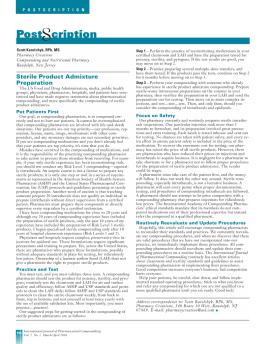