Abstract:  The reader is shown how to perform calculations to solve three problems. The first involves a patient who wants to switch from Estrace to an herbal hormone replacement therapy and shows how to calculate the weight range of isoflavones that the patient would need to consume to receive equivalent estrogenic activity as her current regimen, the maximum estradiol equivalent that the patient is receiving per day from a single daily dose of Promensil and the quantity of each isoflavone the patient is receiving per day. The second deals with an Androderm transdermal patch and shows how to calculate the quantity of the drug that would be released from the patch in 2 hours, the percent of total drug released from the patch after it has been removed and the length of time it would take for all drug tto be released from the patch, assuming the release rate remains constant. The third shows how to calculate the minimum amount that can be weighed on an electronic balance sensitive to 1 mg, with a 5% accuracy. 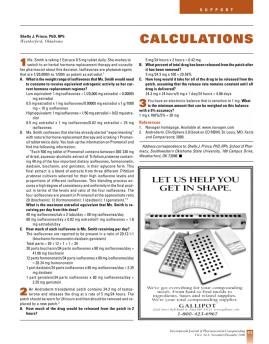