Stability of Nafcillin Sodium After Reconstitution in 0.9% Sodium Chloride Injection and Storage in Polypropylene Syringes for Pediatric Use

Abstract:  The stability of nafcillin sodium (10 mg/mL) in 0.9% sodium chloride injection has been studied at 25°C and 5°C in polypropylene syringes by means of a stability-indicating high-performance liquid chromatograph assay method. The concentrations of the drug were directly related to peak heights, and the percent relative standard deviation based on 5 injections was 1.2. The sodium citrate (added as a buffering agent in the powder) did not interfere with the assay procedure. The product(s) of decomposition separated from the intact drug. At 25°C, the loss in potency was less than 2% after 7 days of storage, and at 5°C it was also less than 2% when stored for 44 days. The pH values of the injections were between 6.2 to 7.0 throughout this study, except after 14 days of storage at room temperature (potency, 82.3%; pH, 5.3). The drug did not adsorb to the syringes, and the physical appearance of the injection did not change. Nafcillin sodium was considered stable for at least 7 days at 25°C and 44 days at 5°C. 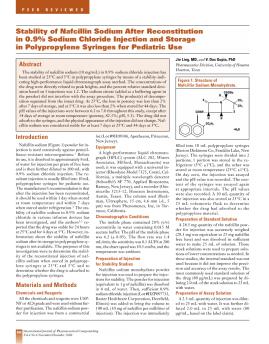 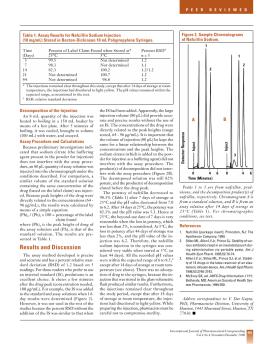