Abstract:  The author voices the fear by some compounding pharmacists that there may be “too many” compounding pharmacists in the near future and that this will jeopardize the economic success of those already practicing. He seeks to allay such a fear by sharing his observations and philosophies as one who has experienced firsthand the change from being a sole compounder in his area to being one of five compounders. One thing that he has noticed is that it is the compounder’s ability to think outside the box that makes him or her successful (not the compounds that he or she makes). Another is that the types of preparations that compounding pharmacists prepare change, so it is necessary for anyone in the field to always be looking for the needs of the market that can be served in the future. Preckshot actually goes so far as to say that a new colleague’s refraining to practice in an area in which one already practices would actually be a disservice, as that would cause him or her to think outside the box and perhaps capture a new market that one could tap in the present. He concludes by recommending that compounding pharmacists have more confidence in what they and their staffs can do and that they take that to the patients and physicians, who will make the ultimate decision what practices to support. 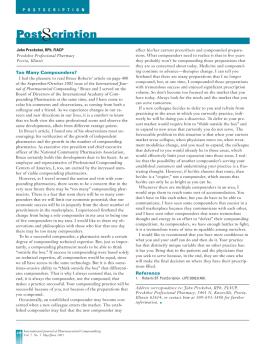