Abstract:  The objective of this study was to evaluate the compatibility of phosphate-buffered warfarin sodium with several drugs and intravenous (IV) solutions previously tested with the unbuffered formulation.

Warfarin sodium 0.1 mg/mL was tested for physical compatibility with seven common IV infusion solutions. Similarly, reconstituted warfarin sodium 2 mg/mL and diluted to 0.1 mg/mL in 5% dextrose injection and 0.9% sodium chloride injection were evaluated for physical compatibility with nine other drugs undiluted or admixed in 5% dextrose injection and 0.9% sodium chloride injection. Samples were evaluated initially and after one, four and 24 hours of storage at room temperature (about 23°C). Visual examinations were performed with the unaided eye in normal, diffuse room light as well as with a Tyndall beam (high-intensity monodirectional light source) (Dlan-Jenner Industries, Woburn, MA) to enhance visualization of small particles and low-level turbidity. The turbidity of each sample was measured as well. Warfarin sodium (phosphate-buffered formulation) was physically compatible with all the common infusion solutions and with six of the nine drugs for at least 24 hours. This is very different than the reported results with the old, unbuffered formulation; previously, warfarin sodium (unbuffered) had been found to be incompatible with most of these drugs and solutions. However, the phosphate-buffered formulation of warfarin sodium was physically incompatible only with ammonium chloride, promazine hydrochloride, and vancomycin hydrochloride in at least some of the combinations tested. Warfarin sodium should not be mixed or administered simultaneously through the same line with the physically incompatible drugs. 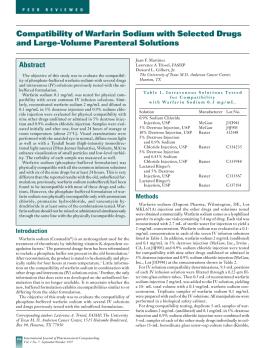 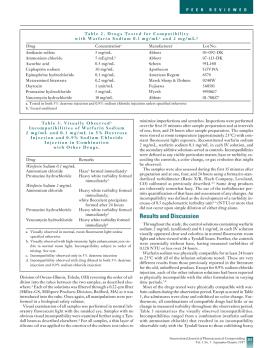 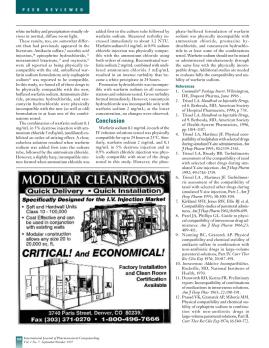