The mixtures were prepared by mixing equal volumes (2 mL) of ranitidine hydrochloride (1 mg/mL) and each tested cephalosporin (20 mg/mL) in a 10-mL glass test tube. All study mixtures were prepared in triplicate and stored at room temperature under normal fluorescent room lighting. The physical appearance and pH of each mixture were recorded; the chemical stability of each drug was immediately determined by stability-indicating high-performance liquid chromatography from samples stored for up to four hours after mixing. Stability was defined as the retention of more than 90% of the initial concentration of each drug. Visual inspection revealed no color or clarity change and the pH changes were less than 0.2 pH units in the tested mixtures for cefazolin and cefoxitin; however, there were significant pH changes for cefbuperazone and cephalothin after four hours of storage. Ranitidine retained greater than 90% of its original concentration within the tested period in the mixture with 20 mg/mL of each tested cephalosporin, except for cephalothin (86.6% of control). In the presence of 10 mg/mL cephalothin, however, ranitidine retained greater than 90% for four hours. Meanwhile, all four cephalosporins retained greater than 90% of their original concentrations for up to four hours in the mixture with ranitidine. From the results obtained, it is clear that ranitidine solution may be coadministered with a solution of either cefazolin, cefoxitin or cefbuperazone during Ysite administration for up to four hours after mixing. On the other hand, since ranitidine with cephalothin (20 mg/mL) fell below 90%, the amount of cephalothin should not exceed 10 mg/mL when coadministered with ranitidine solution. 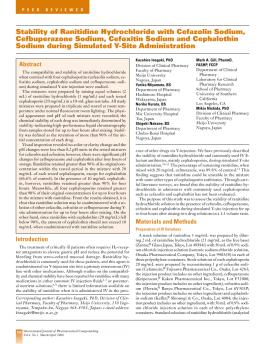 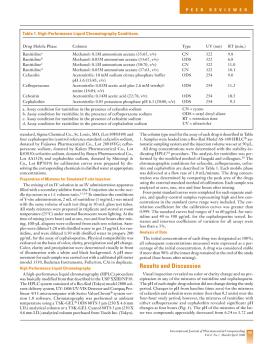 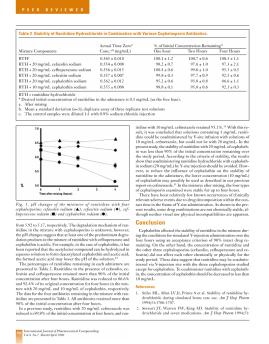 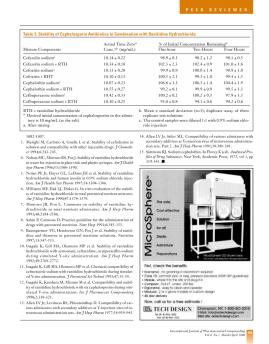