Abstract:  The objective of this study was to determine the feasibility and develop a formulation for an extemporaneously prepared ondansetron suppository from Zofran® 8-mg tablets. The stability of the formulation over 28 days of refrigerated storage and the initial and poststorage drug-release profiles were evaluated. The ondansetron flux in an in vitro model (a rabbit rectal membrane) from each formulation was determined. Suppositories containing 8 or 16 mg ondansetron were made using commercially available hydrophobic and hydrophilic suppository bases. A sensitive, stability-indicating high-performance liquid chromatography assay was used for the analysis of ondansetron. The partition coefficient (octanol/water) of ondansetron and the displacement factor of tablets with each of the two bases were determined. The suppositories, formed in disposable molds, were kept in plastic wrap and stored at 5°C in the refrigerator. The effect of storage on ondansetron release from the suppository base and the stability of ondansetron in the two suppository bases were evaluated over a period of 28 days. The dissolution study provided data on the release profile of the drug over 28 days, as well as the stability of the drug during the storage period. Ondansetron flux through rabbit rectal membrane from the various formulations was determined in vitro using modified Franz diffusion cells. Greater than 90% of the initial amount (8 or 16 mg) of ondansetron was retained in the suppositories after 28-day storage at 5°C for both hydrophilic and hydrophobic formulations. There was no statistically significant difference in the drug-release profiles during this period. Ondansetron flux through the rabbit rectal membrane from 8- and 16-mg hydrophobic suppositories was 393 ± 58 and 76.2 ± 13.8 µg/cm2-hour, respectively (n=6). The corresponding flux from 8- and 16-mg hydrophilic suppositories was 37.8 ± 16 and 81.7 ± 22.9 µg/cm2-hour, respectively. The variability in the flux required further study but the levels achieved indicated that extemporaneous preparation of ondansetron suppositories is reasonable using commercially available components. 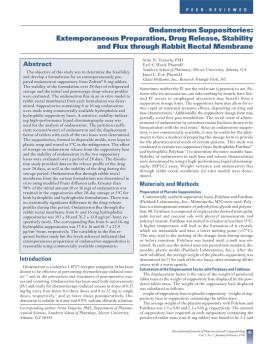 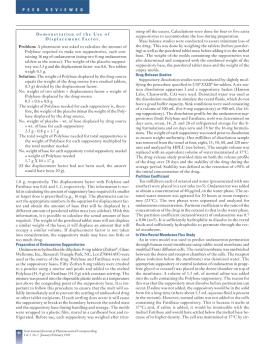 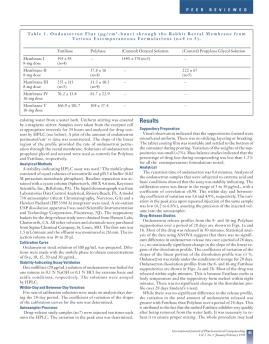 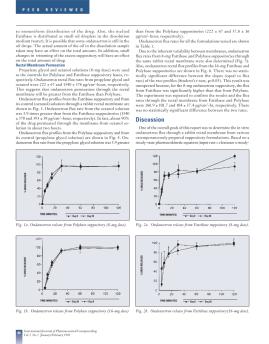 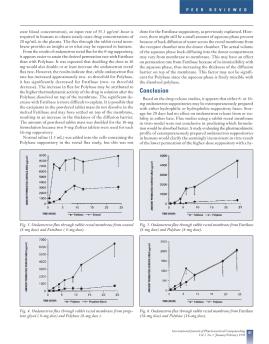 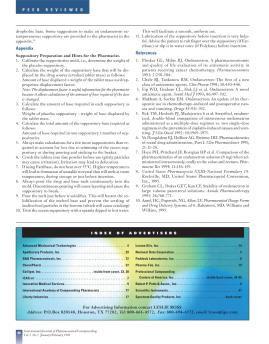