Abstract:  Eslicarbazepine acetate is an anticonvulsant drug with a recent U.S. Food and Drug Administration approval for expanded use in children and adolescents. Currently, eslicarbazepine acetate is only available in the U.S. as 200-mg to 800-mg strength tablets (Aptiom), which are not easy to administer for pediatric patients. This study was initiated to develop an oral suspension formulation for extemporaneous compounding by pharmacists and to generate stability data for storage recommendations. Nine suspension formulations of eslicarbazepine acetate were prepared from Aptiom tablets and commercially available liquid vehicles using the standard mortar/pestle method. The vehicles varied mainly in their solvents, viscosities, and sweeteners. The formulations were evaluated for ease of preparation, physical properties, and initial potency. Two lead formulations were selected for a two-month stability study at room temperature or under refrigeration (2°C to 8°C). The stability samples were withdrawn at pre-determined time points and analyzed by visual inspection, pH measurement, and a stability-indicating high-performance liquid chromatographic assay. The majority of the 9 formulations were found to be easy to prepare and administer at a concentration of 40-mg/mL eslicarbazepine acetate. Particle settling was observed in several formulations over time, but they were re-suspended satisfactorily upon shaking. Two suspensions in 50:50 v/v mixtures of Ora-Sweet or Ora-Sweet SF with Ora-Plus were selected as the lead formulations for the two-month stability study. At the initiation of the study, all samples appeared as white and smooth suspensions with pH ranging from 4.39 to 4.46. The high-performance liquid chromatographic results confirmed that the initial samples contained 100.4% to 102.2% of the label claim strength. Over two months of storage at room temperature or refrigeration, there were no significant changes in visual appearance, re-suspendability, pH, or potency for any samples. No new degradation peaks were observed in any highperformance liquid chromatograms. Based on the study results, two eslicarbazepine acetate suspensions are recommended for extemporaneous compounding from Aptiom tablets. The formulations consist of 40 mg/mL eslicarbazepine acetate in 50:50 v/v Ora-Sweet:Ora-Plus or Ora-Sweet SF:Ora-Plus. Once prepared, these suspensions can be stored at room temperature or under refrigeration for up to two months. 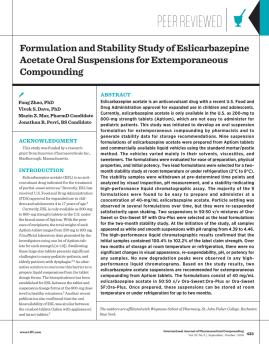 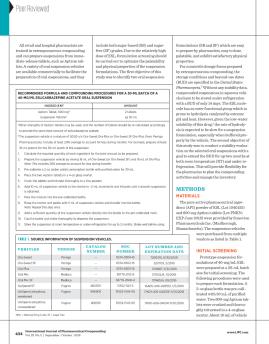 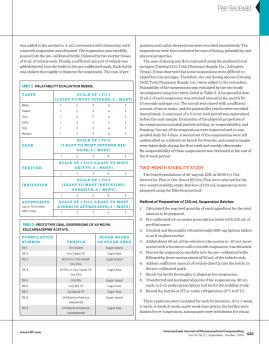 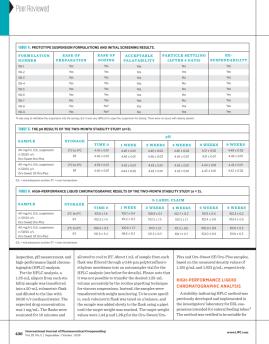 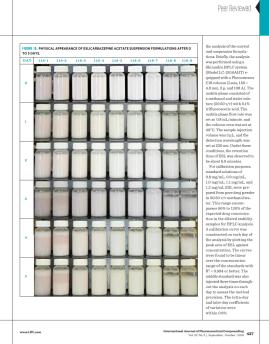 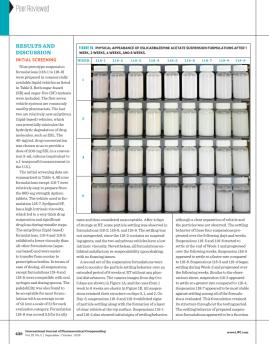 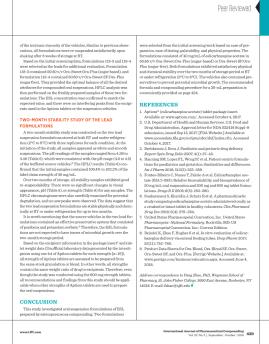