Abstract:  The purpose of this project was to evaluate the compatibility of paclitaxel admixtures with the two reduced-phthalate administration sets designed for use with the Acclaim® Infusion Control Device. The first is a nitroglycerin set composed of polyethylene tubing, while the second is made using tris(2-ethylhexyl) trimellitate (TOTM)-plasticized polyvinyl chloride tubing. Both sets utilize a diethylhexyl phthalate (DEHP)- plasticized pumping segment. The potential for extraction of DEHP from the pumping segments and TOTM plasticizer from the plastic matrix by the Cremophor® EL surfactant present in the paclitaxel injection was evaluated.

Diethylhexyl phthalate and TOTM plasticizer extraction was tested using the paclitaxel diluent at concentrations equivalent to 0.3 and 1.2 mg/mL over three-hour and four-day infusions. All samples were prepared in triplicate in polyolefin bags of 5% dextrose injection and delivered through the administration sets into glass collection flasks. Both DEHP and TOTM content were determined using high-performance liquid chromatographic methods. None of the admixtures delivered rapidly over three hours or slowly over four days through the TOTM-plasticized set exhibited any detectable TOTM. Similarly, no DEHP was detected in the effluent from either set with the simulated 0.3-mg/mL admixtures delivered over three hours. The simulated 1.2-mg/mL admixture delivered over three hours yielded only a barely detectable, but not quantifiable, trace of DEHP. However, slow delivery of both concentrations over four days through both sets resulted in leached DEHP in concentrations ranging from about 30 to 150 µg/mL at both one and four days. The two reduced-phthalate administration sets tested in this study are suitable for the administration of paclitaxel infusions of short duration, for up to three hours. However, the sets cannot be recommended for administration over longerduration delivery times ranging from one to four days due to leaching of DEHP plasticizer from the pumping segments. 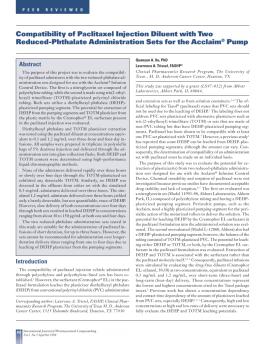 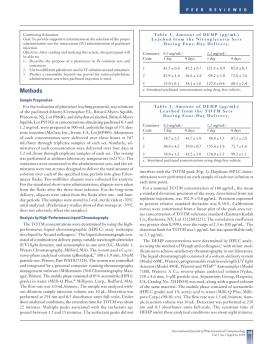 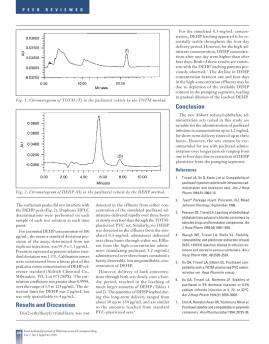