Issue:  Sep/Oct 2003 - After the Women's Health Initiative Trial
View All Articles in Issue

Abstract:  Amiodarone is commercially available as both a tablet and an injectable formulation. It is widely dispensed as an extemporaneously compounded suspension for pediatric and geriatric patients. Extensive stability data at numerous temperatures and a calculated shelf life based on kinetics for such a formulation have not been reported. Refrigeration and room temperature data for finite times have been reported in the literature.

In this study, a stable extemporaneous formulation of amiodarone hydrochloride was formulated using Pacerone tablets. The formulation consisted of 0.75% carboxymethylcellulose and 0.75% Veegum as suspending agents; 25% sucrose, provided as simple syrup; and aqueous strawberry concentrate as flavor. A total of 2.5 L of the formulation was compounded and stored in quantities of 150 mL in 8-oz glass containers. The initial drug content was determined by reverse-phase high-performance liquid chromatography, with a method that was developed in our laboratory. The stability study was carried out by storing three containers at five different temperatures, namely 4, 30, 40, 50 and 60°C. The suspension was analyzed at the end of 2, 6, 12, 24 and 48 hours at 7 days, and, thereafter, at the end of every week for 13 weeks. The percentage of drug remaining was plotted against time for each temperature. The slope of the regression line was obtained for each temperature and the zero-order degradation rate constant obtained. The logarithm of the zero-order degradation rate constants was plotted against the inverse of the temperature in degrees Kelvin to obtain the Arrhenius plot. From the regression line for the Arrhenius plot, the zero-order degradation constant at 25°C was calculated to be 0.0517 day–1. The shelf life for the formulation at 25°C was calculated to be 193.4 days; the shelf life under refrigeration (4°C) was found to be 677.3 days. The degradation products were characterized using high-performance liquid chromatographic-mass spectrometry. Data obtained from the analysis suggested that amiodarone cleaved at its ketone and ether linkages to yield corresponding degradation products. 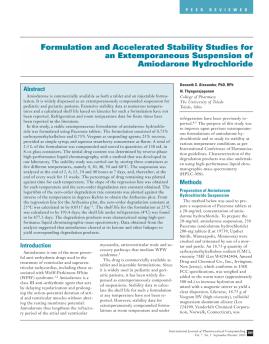 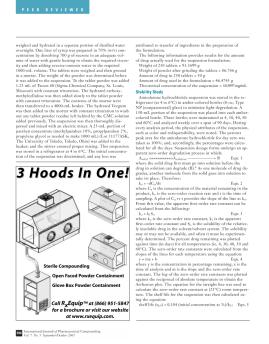 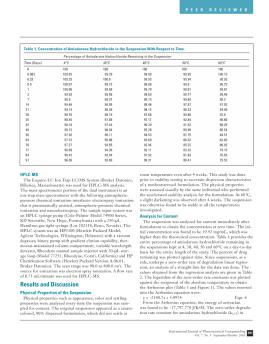 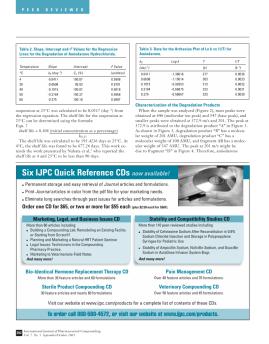 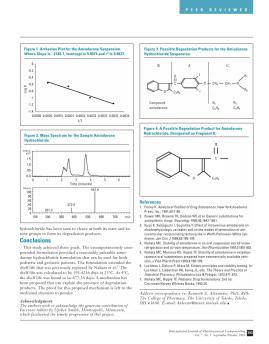