Stability of Spironolactone Oral Suspension in PCCA Base, SuspendIt

Abstract:  Spironolactone (Aldactone) is a potassium-sparing diuretic used to treat hypertension and heart failure and may also be used to treat edema resulting from kidney disease, low potassium levels, or excess aldosterone. No commercial liquid dosage form of spironolactone exists. An extemporaneously compounded suspension from pure drug powder or commercial tablets would provide an alternative option to meet unique patient needs. The purpose of this study was to determine the physicochemical stability of spironolactone in the PCCA base SuspendIt. This base is a sugar-free, paraben-free, dye-free, and gluten-free thixotropic vehicle containing a natural sweetener obtained from the monk fruit. It thickens upon standing to minimize settling of any insoluble drug particles and becomes fluid upon shaking to allow convenient pouring during administration to the patient. A robust stability-indicating highperformance liquid chromatographic assay for the determination of spironolactone in PCCA base SuspendIt was developed and validated. This assay was used to determine the chemical stability of the drug in SuspendIt. Samples were prepared and stored under three different temperature conditions (5°C, 25°C, 40°C) and assayed using the high-performance liquid chromatographic assay at pre-determined intervals over an extended period of time as follows: 0, 7, 14, 29, 46, 60, 90, 120, and 180 days at each designated temperature. Physical data such as pH, viscosity, and appearance were also monitored. The study showed that drug concentration did not go below 90% of the label claim (initial drug concentration) at all three temperatures studied. Viscosity and pH values also did not change significantly. This study demonstrates that spironolactone is physically and chemically stable in SuspendIt for 180 days in the refrigerator and at room temperature, thus providing a viable, compounded alternative for spironolactone in a liquid dosage form, with an extended beyond-use date to meet patient needs. 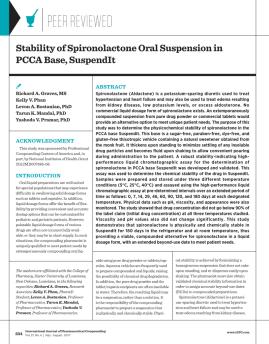 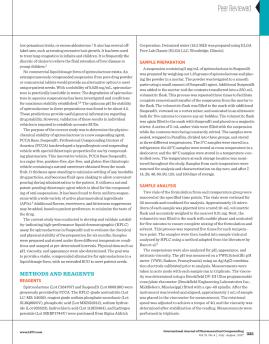 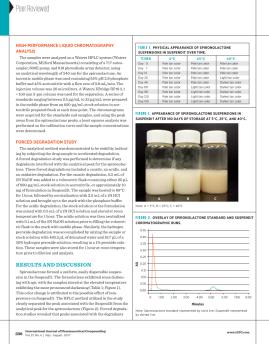 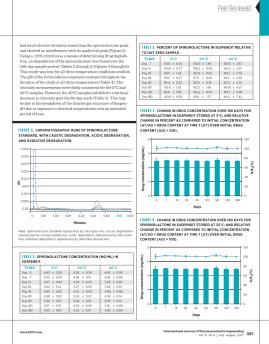 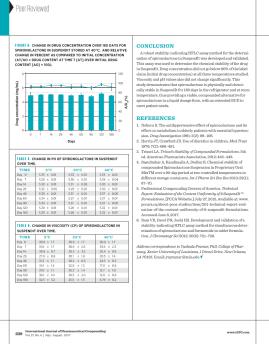