Abstract:  The stability of extemporaneously prepared sodium benzoate oral suspension in cherry syrup and Ora-Sweet was studied. Oral solutions of 250-mg/mL sodium benzoate were prepared in either cherry syrup or Ora-Sweet. To a beaker, 50 grams of Sodium Benzoate Powder USP was dissolved and filtered, the solution was divided equally into two parts, and each aliquot was added into two separate calibrated 100-mL amber vials. In the first vial, cherry syrup was added to make a final volume of 100 mL. In the second vial, Ora-Sweet was added to give a final volume of 100 mL. This process was repeated to prepare three solutions of each kind and all were stored at room temperature. A 250-µL sample was withdrawn immediately after preparation and again at 7, 14, 28, 60, and 90 days for each sample. At each time point, further dilution was made to an expected concentration of 0.25 mg/mL with sample diluent, and the samples were assayed in triplicate by stability-indicating high-performance liquid chromatography. Stability was defined as the retention of at least 90% of the initial concentration. At least 92% of the initial concentration of sodium benzoate in cherry syrup and at least 96% of the sodium benzoate in Ora-Sweet remained throughout the 90-day study period. There were no detectable changes in color and no visible microbial growth in any sample. Extemporaneously compounded suspensions of sodium benzoate in cherry syrup or Ora-Sweet were stable for at least 90 days when stored in a 4-oz amber plastic bottle at room temperature in reduced lighting. 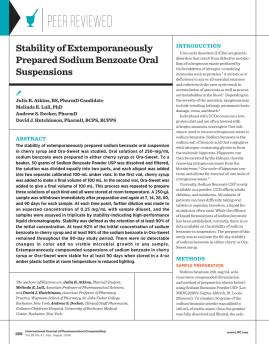 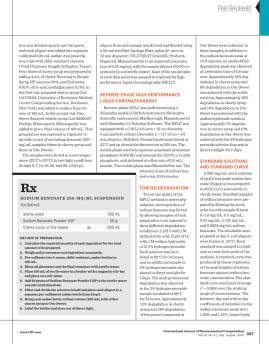 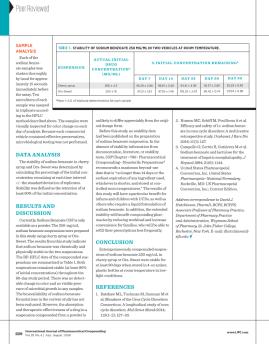