Triplicate test samples were prepared by reconstituting the penicillin antibiotics and bringing the required amount of each drug to a final volume of 100 mL with 0.9% sodium chloride injection. The test solutions were packaged in AutoDose bags, which are ethylene vinyl acetate plastic containers designed for use in the AutoDose Infusion System. Samples were stored protected from light and were evaluated at appropriate intervals for up to 7 days at 23°C and up to 30 days at 4°C. Physical stability was assessed by means of a multistep evaluation procedure that included both turbidimetric and particulate measurement as well as visual inspection. Chemical stability was assessed with stability-indicating high-performance liquid chromatographic (HPLC) analytical techniques based on the determination of drug concentrations initially and at appropriate intervals over the study periods. All the penicillin admixtures were initially clear when viewed in normal fluorescent room light. When the admixtures were viewed with a Tyndall beam, a trace haze was observed with the ampicillin sodium and nafcillin sodium mixtures but not with the oxacillin sodium mixture. Measured turbidity and particulate content were low and exhibited little change in the ampicillin sodium and oxacillin sodium samples throughout the study. The nafcillin sodium samples stored at room temperature remained clear, but a microprecipitate developed in the refrigerated samples between 14 and 21 days of storage. All samples were essentially colorless throughout the study. HPLC analysis indicated some decomposition in the samples. Ampicillin sodium, which was the least stable, exhibited a 10% loss after 24 hours at 23°C. In the samples stored at 4°C, ampicillin losses were 6% and 11% after 3 days and 5 days, respectively. Nafcillin sodium exhibited a 10% loss after 5 days at 23°C. Less than 3% loss occurred after 14 days at 4°C, but the microprecipitation that developed resulted in the termination of that portion of the study. Oxacillin sodium was the most stable; it exhibited less than a 10% loss after 7 days at 23°C and less than a 5% loss after 30 days at 4°C. Ampicillin sodium, nafcillin sodium, and oxacillin sodium exhibited physical and chemical stability consistent with previous studies on these drugs. The AutoDose Infusion System bags did not adversely affect the physical and chemical stability of those three penicillin antibiotics. 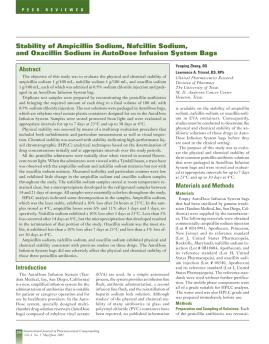 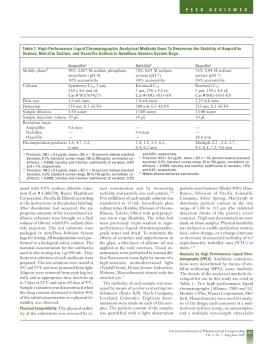 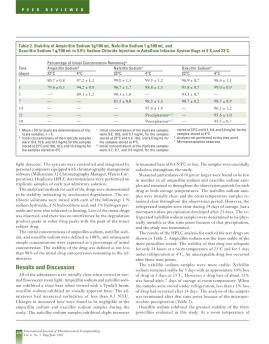 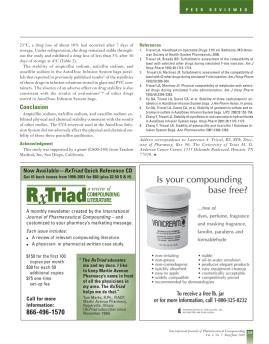