Abstract:  Wound care is one of the main concerns of patients with diabetes. This case involves a 65-year-old woman with a wound (4 cm x 2 cm) on her right foot, underneath the big toe. The patient had not been successful in healing this wound using conventional preparations for a year. A decision was made to compound a wound-care gel formulation, and two preparations were compounded. One contained phenytoin 3% and misoprostol 0.0024% gel and was used for wound healing. The patient was instructed to cover the wound twice daily with about 0.2 mL of this preparation. The other preparation was nifedipine 10% in a Pluronic lecithin organogel 20%. The patient was instructed to apply 0.6 mL twice daily around the wound and callous surrounding the wound and up the foot to increase circulation to the wound area. Saline rinses, which the patient had already been using, were continued as before (with application of the nifedipine gel afterward, followed by application of the phenytoin/misoprostol formulation). The wound was covered with sterile gauze. Healing was seen almost immediately and was quite advanced after 8 weeks. During 4 additional weeks, final closure of the wound occurred. Total healing time for the wound was 17 weeks. The author concludes that wound gels are effective in healing diabetic foot ulcers and that this is a promising therapeutic alternative for patients with refractory foot ulcers. 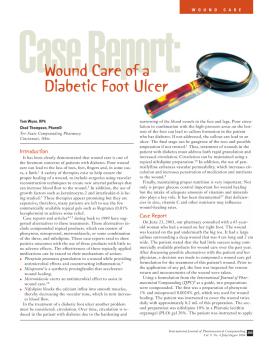 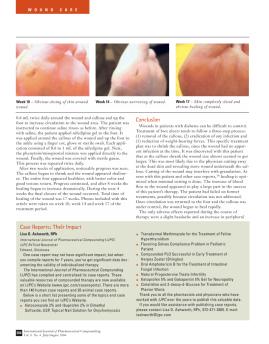 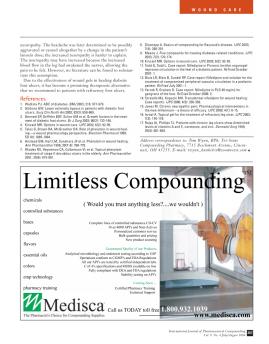