Stability of Piperacillin Sodium After Reconstitution in 0.9% Sodium Chloride Injection and Storage in Polypropylene Syringes for Pediatric Use

Abstract:  A stability-indicating high-performance liquid chromatography (HPLC) assay method was used to study the stability of piperacillin sodium (40 mg/mL) in 0.9% sodium chloride injection at 25°C and 5°C in polypropylene syringes. The concentrations of the drug were directly related to peak heights, and the percent relative standard deviation (RSD) based on five injections was 0.8. Three products of decomposition separated from the intact drug. At 25°C, the loss in potency was less than 10% after 5 days of storage, and at 5°C, it was less than 2% when stored for 28 days. The pH value of the injection decreased from 5.3 to 4.4 when stored at 25°C for 5 days or when stored for 28 days at 5°C. The drug was not adsorbed onto the syringes, and the physical appearance of the injection did not change. 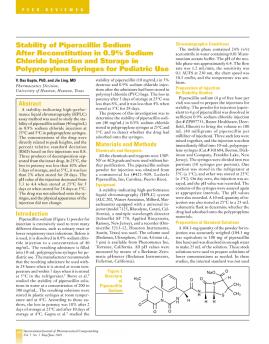 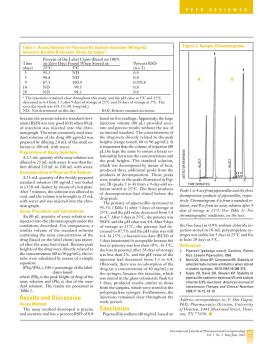