Abstract:  Morphine sulfate is a commonly prescribed drug for the relief of pain. This study investigated the dissolution profile of extemporaneously prepared slow-release morphine-sulfate capsules and MS Contin® (Purdue Frederick, Norwalk, CT). Extemporaneously prepared capsules obtained from one pharmacist were compared with MS Contin tablets. In addition, we compared capsules prepared by 15 different pharmacists and three different batches prepared by the same pharmacist. A dissolution test1 was used to generate the dissolution profile for drug products. The compounded capsules demonstrated a slow-release profile that was similar to the commercial preparation except that the morphine sulfate was released at a faster rate. The zero-order dissolution rate constant (k0, milligrams/ hour) was calculated from the dissolution profiles. Statistical analysis of k0 showed that capsules prepared extemporaneously by pharmacist one showed a faster dissolution compared to MS Contin (p=0.0368); the difference was a rate of 0.81 mg/hour during the first four hours. When variability among compounding pharmacists was compared, only one batch of compounded capsules prepared from 15 different pharmacies showed a significantly different rate of morphine release. When reproducibility by a single pharmacist was examined, capsules showed some variation from batch to batch (p=0.05). Although variation was seen from one pharmacy to another and even between different batches made by the same pharmacist, the compounded capsules showed a remarkably consistent in vitro slow-release profile. 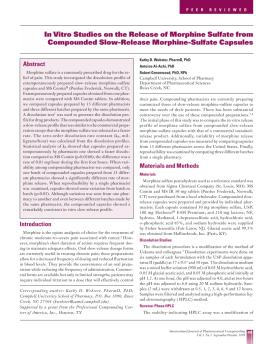 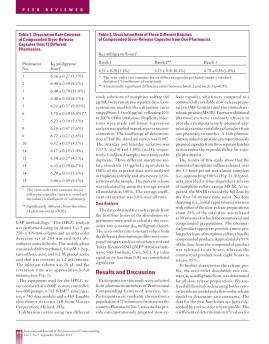 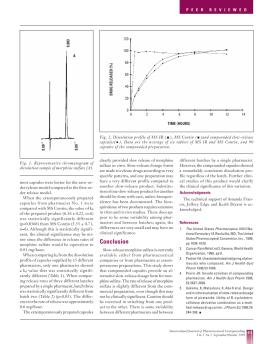