Containment of Hazardous Particulates in the Compounding Pharmacy

Issue:  Jul/Aug 2003 - After the Women's Health Initiative Trial
View All Articles in Issue

Abstract:  This article describes the experience of Ray Moreno, RPh, FIACP, a compounding pharmacist/pharmacy owner since 1982. When a technician developed a small benign lump in a breast after the pharmacy had begun compounding more bioidentical hormone preparations, he began to look for additional ways to protect his employees. Although gloves were worn during compounding, Moreno became concerned about airborne particulates. He then provided technicians with surgical masks and began investigating fume hoods, which still did not appear to be adequate protection. Next he investigated hood-type air-filtration devices. He invested in a chemo hood and other protective devices but still was not confident they provided enough protection. He evaluated his employees by means of saliva testing to determine staff levels of estrogen, estradiol and testosterone over an 18-month period, with increasing protection for employees during compounding, and was dismayed to find that they had elevated hormone levels. He then contacted Germfree Laboratories, Inc., a Florida company specializing in laminar flow equipment, to develop special equipment. After company experts visited the pharmacy and talked with Moreno, they designed a negative-pressure particulate containment hood that covers the work space and is 2 feet above the work surface. The hood, designed for high-efficiency particulate air filter testing and certification, has the inward face velocity of a class I biological safety cabinet. Everything needed for compounding is contained within the hood. Further refinements of procedures, in addition to use of the hood, resulted in lowering of employee hormone levels to the normal range. Moreno continues to work with the company to design a laminar-flow glovebox for compounding. 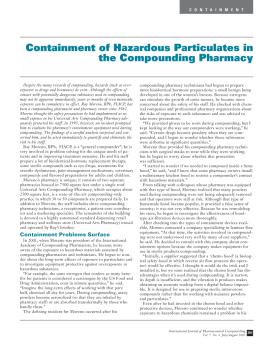 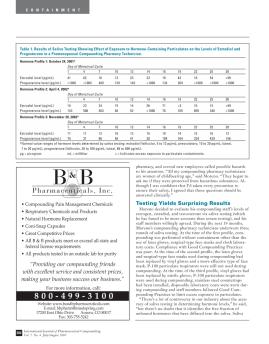 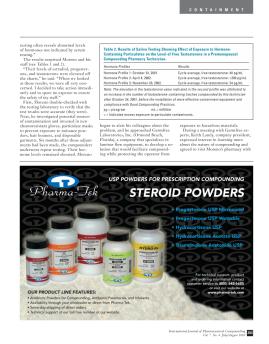 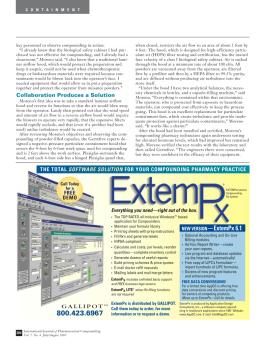 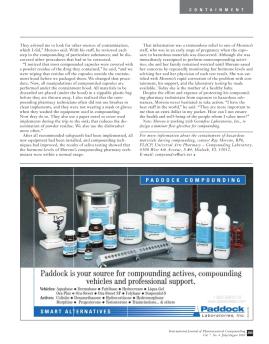