Abstract:  A stability-indicating high-performance liquid chromatography assay method was used to study the stability of levothyroxine sodium injection (100 µg/mL) in 0.9% sodium chloride injection after being stored at 5°C in polypropylene syringes. The method developed is accurate and precise and has a percent relative standard deviation of 1.3 based on 5 readings. The concentrations of the drug were directly related to the peak heights. The drug in the injection did not adsorb onto the polypropylene syringes. After 7 days of storage at 5°C, the injection was clear, the pH value had not changed, and there was no loss in the potency of levothyroxine sodium. The manufacturer’s recommendation that the injection be used immediately after reconstitution is very conservative. 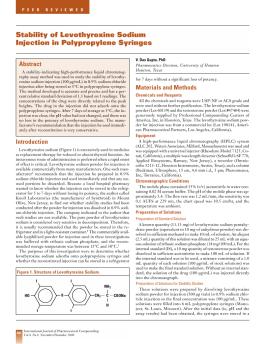 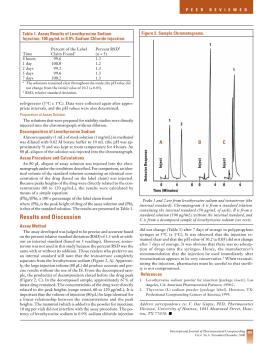